This time of year, I sometimes find it hard to get out on the water.  Weather, work, kids sports and life gets in the way sometimes.  I always keep an eye on my local waters (Truckee, Little Truckee) so that if a window opens up in weather and my schedule I can sneak out and go fishing.  This year with all the snow it has been a challenge but I told myself,  even if I needed to snowshoe in, i was going soon!

We have a place at Old Greenwood making it very convenient for me to get close and have a place to crash at the end of the day.  I turned 44 recently and my wife scheduled a guide day with Frank Pisciotta of CyberFly.com this past weekend as a gift for my birthday. 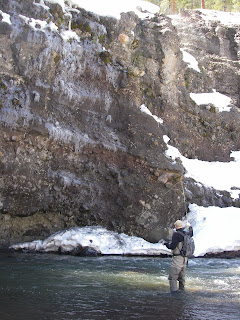 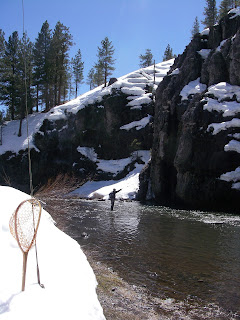 I really had a great time fishing & learning from Frank.  He has been on the water in the Truckee area guiding for over 25 years and it SHOWS!  Frank put me into some "new" water for me that I would normally pass right by.  We got into fish right away, hooking 3 & landing a nice 17" wild rainbow.

Thanks again Frank!
Posted by Ryan at 10:21 AM No comments:

Every year in March the boys and I go south, Mammoth area that is, to fish the Lower Owens.  In 9 years weather has never been an issue; not the case this year.  The storm of the decade occurred a few days prior to departure dumping mass "snowage" on our beloved Sierras!

Carson & I made the road trip.  Tyler has been sick and needed more time to recover (long story).
So we set out only to be stopped 30 miles from home with a road closure on Highway 50 in Pollock Pines. 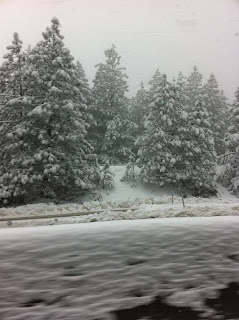 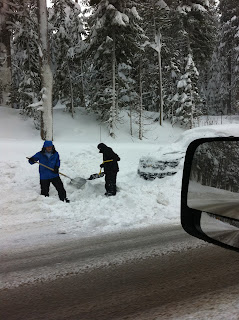 With some "creative maneuvering,  I was able to sneak back on the road and continue in 4WD over the summit and into Tahoe.  Once onto 395 it was smooth sailing.

As a good fisherman, I checked the flows on the Lower Owens before we left....they were sitting around 100 cfs, and reports were really good.  But, thanks to LADWP, by the time we rolled into Bishop in the afternoon, the flows had been increased to well over 300 cfs and climbing.  Water was murky at best and just too big of a change too fast for fish to be actively feeding.  Bummer!  When things are right on the Lower, it is a great fishery for kids to learn how to fly fish.

We tried the Upper Owens where flows were perfect, but the wind and 25 degrees made it a bit "nippy".  Carson was a trooper and stuck it out for a couple of hours.

Overall, the fishing trip was a bust, but we did manage to hook four fish but brought none to net.  We made the best of it and it was great to see the amount of snow that blanketed the Sierras! 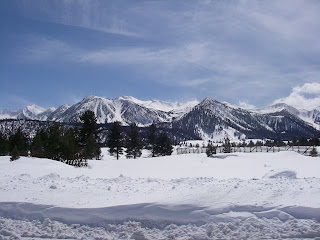 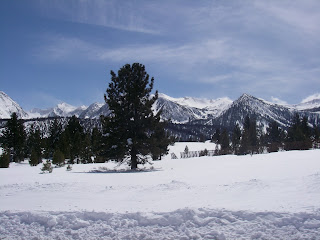 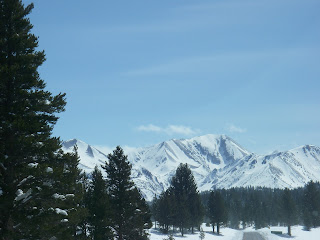 Two days of floating on the Lower Sacramento River in early spring can be "iffy" when it comes to weather.  However, the fishing is consistently very good.   Tyler and I took a fews days to travel up to Redding and float the river with Tim Root from SacRiver Outfitters.  We have floated with Tim before and he is great; no matter your angling skills, Tim can get you "hooked up"! 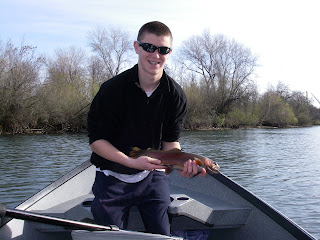 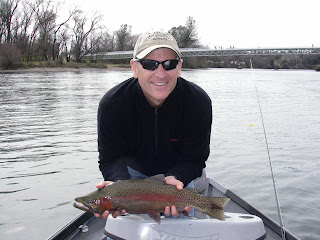 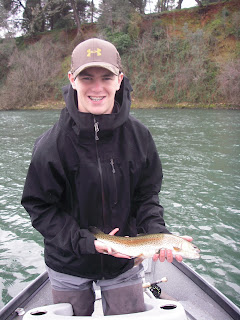 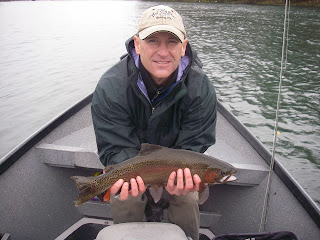 We ran into some rain on day two, but that didn't stop the action.  We floated from Turtlebay/Sundial Bridge down to the first take out & had plenty of action.  Average fish was in the 17-18" range with a few (caught by yours truly) over 20 inches.
Posted by Ryan at 8:48 AM No comments:

Another Generation of Fly Fisherman have been released on the waters.... 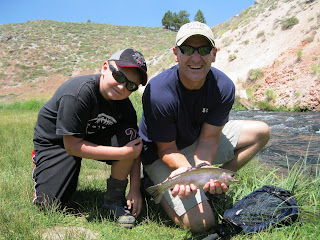 My wife is a cheerleading coach for our local high school.  Each year, cheer has several camps they attend to better their skills and compete against other schools.  It has become a tradition in my home for the boys to "get away" during these days.  About 9 years ago, I started taking my older son, Tyler, fly fishing.  At the time, he was 8-9 years old.  We chose the Lower Owens River, outside of Bishop as our destination.  For those who have never been there before, it is a great river to teach kids to fly fish.  Lots of fish per mile, easy access, flows are usually in the "small stream" size making wading doable and close to town when the day is done.  We had some great times and my son got better each year, catching more than his fair share and at about age 11 started betting dad who would catch the biggest fish of the day (the winner got to chose the dinner spot).  For those of you who know Bishop (and 11 year olds) there are not many choices and on those days when he "won" we ate at McDonalds.

Now, 9 years later, Tyler now 17, a teenager, mostly hangs out with his buddies and doesn't fish as much with dad.  However, my 10 year old Carson, has been dying to go on these trips since he was 5.  This year Carson and I headed for the Eastern Sierra's for our first lesson in fly fishing and fine dining on a "guys'" weekend away while mom did her cheer thing. 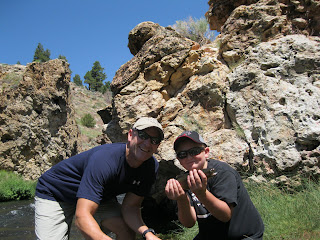 Our plan was to fish Hot Creek and the East Walker River (the Lower Owens has been flowing high lately, Bishop was blazing HOT, and staying in Mammoth Lakes seemed much more appealing.  I hired two guides, one from Sierra Drifters, "Two-Bug Doug Dolan" for the East Walker and one from The Troutfitter, "Cog MacNeil" for Hot Creek.  I figured the help of a guide would speed up the learning curve for Carson and make the trip much more enjoyable for both of us.  I was right, both guides were AWESOME! 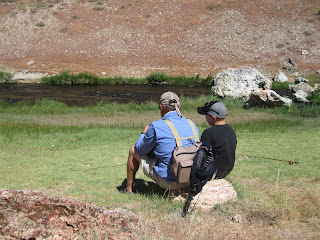 Day one we fished with Cog and Hot Creek. Hot Creek can be very technical so Carson as a first time fly fisherman had a 50/50 chance of success.  Cog got him into fish right away and he hooked what we think was a "lunker" in the first or second drift.  Hooking and landing a large fish your first time are completely different things and "touch" and "play" are required, all skills Carson learned on that fish and throughout the day.  Cog was very patient with him and Carson landed some really nice fish on Hot Creek.

Carson got a little over-heated mid-day but "powered" thru it. It can get warm in the canyon section of Hot Creek and that particular day we had little or no wind to cool us off.  A nice dip in the pool afterwards  got him rejuvenated and ready for Day 2 on the East Walker. 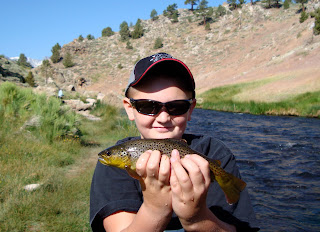 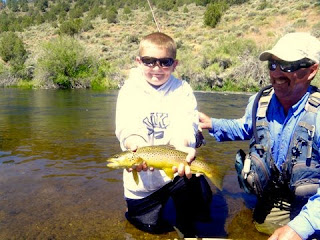 The East Walker was a completely different experience.  We added wading!!!  We met "Two-Bug" Doug Dolan from Sierra Drifters early in Bridgeport.  I have to say that Carson was a little worried about  getting in the water for fear of floating away.  The first 15 minutes were "spooky" and both Doug and I were thinking this could be a long day!  Doug was a rock star.  He got Carson into fish within minutes of  stabilizing him in the current (very important) and again Carson hooked a nice one.  Here is the issue, we are not fishing for Marlin on 200lb test and horsing them in like you see on the Bass Pro Tour is a technique that should be left at home when fishing trout in fast moving water.  The East Walker has some very large browns and rainbows, and at anytime you could hook one.  Carson proceeded to hook but not land several more.  Doug finally got him "dialed in" and he landed several throughout the day.  Each fish landed Carson made it clear that he had "beat his record"!

I would like to personally thank both Doug Dolan of Sierra Drifter & Cog MacNeil of The Troutfitter for  making our experiences memorable.  Carson has learned skills he can take with him forever.

If you are in Mammoth Lakes, I have to mention Hot Chicks.  By recommendation, we tried this "chicken joint". Talk about the BOMB!   The portion alone could choke a dinosaur.  The chicken was perfect and even though I am not a big Mac & Cheese fan, I was pleasantly surprised with the selection. 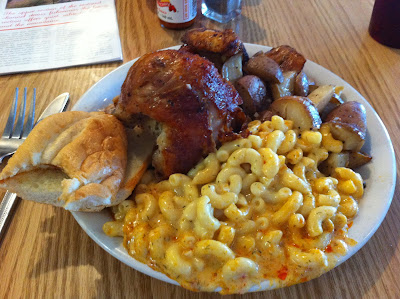 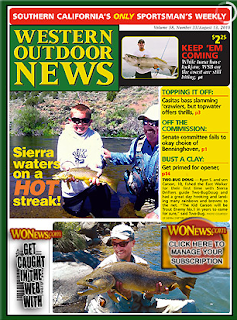 All in all a great trip, good memories and fish in the net.  Thanks Sierra Drifters, Troutfitter for filling our fishing nets and Hot Chicks for filling our bellies!  Oh and on a side note, Carson made the September cover of Western Outdoor News!!
Posted by Ryan at 10:34 AM No comments:

My great family gave me a float trip on the Lower Sacramento for Father's Day....so I made a weekend of it in the Redding area.  The float was great, The Fly Shop in Redding really came thru with a guide and expert advice on other places to fish while in the area.  Day two I fished Hat Creek in the morning and Pit River 5 (I believe).  Both were productive, however, "the Pit" was much more so. Some nice rainbows were had.    I always love the north area when I get up there. Next time, I will fish the Upper Sacramento AND the Pit again.

Thanks guys for a great weekend!
Posted by Ryan at 9:52 AM No comments:

Quickie on the Calaveras River

With this crazy weather, my last minute chance to wet my line changed drastically Saturday morning.  Although fishing the Little of Big Truckee on Saturday could have been decent, I just wasn't into bundling up one more time and fishing with numb feet and fingers.  So I opted for a close-to-home trip on the Calaveras River.  The Calaveras River, outside of Valley Springs, CA is a short, scenic one hour drive from my home in El Dorado Hills, CA.

The Calaveras is a good choice this time of year (with the spring run-off) as it is a tailwater flowing out of New Hogan Reservoir.  Saturday was "opening day" for this stream.  The River is closed until the 4th Saturday in May.  The weather co-operated beautifully, 60 degrees and partly cloudy and an opportunity for "some" small bug activity/hatches.

I was able to hook and land 11 fish, most wild, a few planters.  They all ranged in size from 8-13 inches, of fought hard and were clean and colorful.  I nymphed the whole day, using Mighty Mays, Mighty Mite and some small PMDs with an occasional San Juan Worm as the lead fly.

I needed a fix and got it on the Calaveras.  A good choice if you live in the Gold Country!
Posted by Ryan at 7:45 AM 1 comment:

My ten year old...BORN TO FISH! 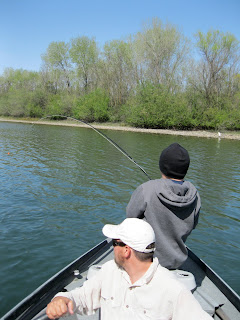 Back in April, my ten year old son, Carson & I made our first "fly fishing" trip together.  Now I have been taking my older son and daughter to the Lower Owens River outside of Bishop, CA for year.  This time, however, we decided on a float trip on the Lower Sacramento River in Redding.

What a great experience!  I really like the guys at www.sacriveroutfitters.com!  Tim Root was awesome and really worked with Carson.  About 15 minutes into the days float, Carson hooked one. He wanted to do it "all on his own.  Well his line (as you can see in the photo) is wrapped wrong and in turn he lost that one.  Needless to say he was into another one soon thereafter. 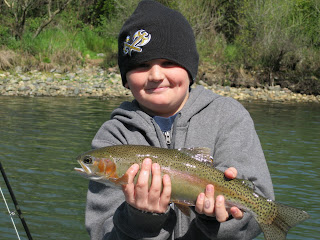 Carson hooked about 10 and landed 4. Not bad for your first time fly fishing, on a drift boat.  The Lower Sac Rainbows are no easy fish to land, powerful, full of life and all of good size. 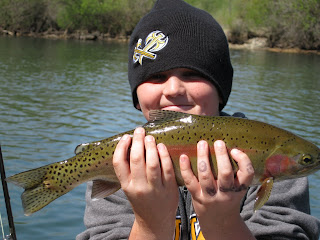 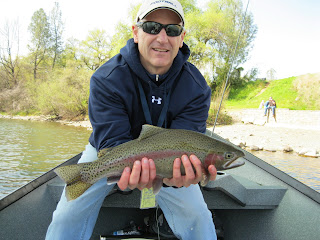 If you go, be sure to use Sac River Outfitters and ask for Tim (owner and wonderful guide).  Lodging and food are cheap and there are tons of choices.  I typically use Priceline.com to get the best deals.
Posted by Ryan at 8:31 AM No comments:

Dad gets one on a lightning bug